On 21 April 2017 Catherine Schenk, Project Leader for UPIER, took part in an open meeting on ’50 Years After: The SDR’s Role in the International Monetary System’ at the Spring Meetings of the International Monetary Fund.  She argued that the past could be used to help assess the prospects for reform of the SDR, particularly emphasising that the origins of the SDR in the 1960s demonstrated the lack of consensus on how it should be used and its role in the international monetary system.  Technical aspects of the SDR meant that it was difficult to operationalise and when, in the 1970s, there was a desire to enhance and broaden the role of the SDR, this proved intractable.  Proposals to expand the role of the SDR today face similar obstacles: there is no significant private market purpose or use of SDR, it is not a liquid asset to be used as reserves, existing issue of SDR comprises less than 5% of global reserves. 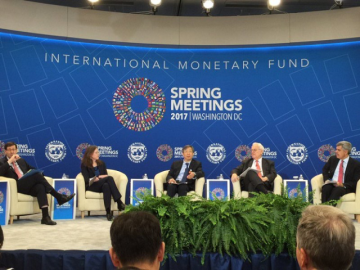